There are two main types of cannabis plants: Cannabis Indica and Cannabis Sativa, or just Indica and Sativa in short.

These two types of plants differ in several ways: origin, appearance, flowering time and yield size and effect. Cross-breeding these two types has led to a wide range of so-called hybrid strains. These hybrids can be 50/50, Indica-dominant or Sativa-dominant.

Cannabis Indica is believed to have originated from the Hindu Kush region in India, Pakistan, and Afghanistan. Cannabis Sativa originates from areas around the equator like Colombia, Mexico, Thailand and Southeast Asia.

The unique appearances that both types of plants have developed because of the different geographical locations both plants appear in the wild. 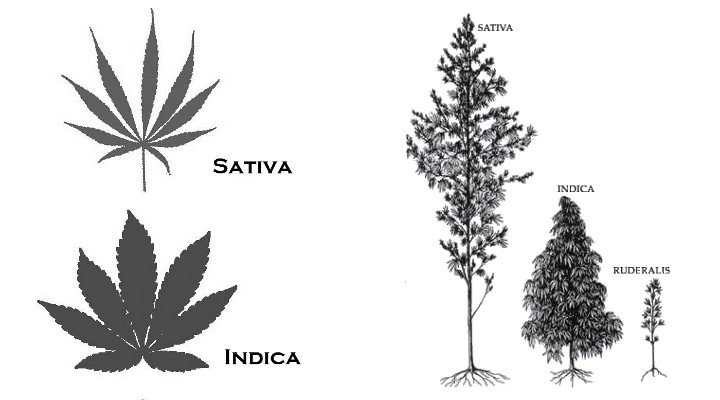 Because of this distinct contrast, Sativa strains are preferred for daytime and Indica strains for nighttime.

Now you know all about the differences between Indica and Sativa, it is time to inform you about Cannabis Ruderalis. There is still some disagreement as to whether Ruderalis is a separate species or subspecies. The characteristic that sets Ruderalis apart for other cannabis plants is its growing cycle; the transition from growing to flower period depends on the maturity of the plant and not the ratio of light/dark.

A pure Cannabis Ruderalis has low concentrations of THC, which makes her uninteresting to smoke. However, its stability, short growing cycle, and ability to start flowering automatically make her attractive to growers. The genes of the Ruderalis allows growers to create autoflowering hybrids.

There are over 450 compounds in cannabis plants, 66 of them are referred to as cannabinoids, a chemical that acts on cannabinoid receptors in the human brain. This results in the alteration of neurotransmitter release. Cannabidiol (CBD) and tetrahydrocannabinol (THC) belong to the cannabinoids.

THC is usually referred to as the psychoactive ingredient in marijuana, meaning that it affects your brain and gets you high. After consuming cannabis, THC stimulates your brain and enhances the release of dopamine. Depending on the dose of THC it can be sedative, stimulating or psychedelic.

CBD is considered a non-psychoactive compound; it will not make you high. This may sound disappointing to recreational users as they usually smoke to get high, but this unique quality of CBD is what makes CBD interesting for medical purposes. Marijuana high in CBD has been found to have significant medical benefits without making its users feel stoned.

SO WHAT’S THE DIFFERENCE BETWEEN THESE TWO CANNABINOIDS?

As noted above, the main difference between THC and CBD is that THC is psychoactive and CBD is non-psychoactive. In other words: THC affects your brain and gets you high while CBD won’t. CBD even has the capacity to reverse the effect of THC.
THC has been found to have the ability to make its users feel anxious; CBD has the opposite effect. It has even been shown that CBD can reduce the anxiety caused by the use of THC.
Also, THC has a wide range of effects on sleep because it works on the body’s endocannabinoid system, which is responsible for regulating sleep among other things. THC makes it easier to fall asleep, it makes you sleep longer and deeper and it enhances breathing in sleep apnea. CBD, on the other hand, has the capacity to increase alertness.

With both THC and CBD there is no risk of overdosing.

In this section, we will give you an overview of what research has taught us about the medical use of cannabis. Please note that effects might be negative when cannabis is being used for non-medical purposes. All the information provided below is based on medical research.

A review study by Guzman (2003) shows that it is well-established that cannabinoids have alleviating effects on some symptoms that are related to cancer. These symptoms include nausea, vomiting, and pain. But more important, various studies have shown that cannabinoids can reduce tumor growth and progression (Sarfaraz, 2008). The cannabinoids induce direct growth and death of tumor cells by modulating key cell-signaling pathways. They can kill tumor cells without affecting the healthy cells surrounding the tumor. Cannabinoids do not produce the same toxic effects as conventional chemotherapies.

Another study concluded that cannabinoids exhibit a remarkable anticancer activity in preclinical models of cancer. Further clinical studies are needed to help clarify whether cannabinoids could be helpful in the fight against cancer (Velasco, Hernandez-Tiedra, Davila & Lorente, 2016).

Recent research has shown that cells that are being pre-treated with THC and CBD  marijuana extracts may help kill certain cancer cells and reduce the size of others. The very same research proved a dramatic incline in tumor volumes when cannabinoids were used together with radiation (Scott, Dalgleish & Liu, 2014).

Cannabinoids have found to be effective against chronic pain in Multiple Sclerosis (Svendsen, Jensen, & Bach, 2004; Rog, Nurmikko, Friede & Young, 2005); they have little or no effect in patients with acute pain. Also, chronic pain with causes like tumor pain, rheumatism and fibromyalgia has been found to be reduced with cannabinoids (Johnson et al., 2010).

A recent study (Haj-Dahmane & Shen, 2014) found that cannabinoids may be helpful in treating depression that results from chronic stress.

Parents of children with treatment-resistant epilepsies reported a high rate of success in reducing seizure frequency with the use of cannabidiol-enriched cannabis. The majority of these children have Dravet Syndrome, a severe form of childhood epilepsy that often does not respond to available treatments (Porter & Jacobson, 2013).

Glaucoma is a disease of the eye that can result in damage to the optic nerve and vision loss; it is the leading cause of blindness in the world. Potentially, cannabinoids could become a useful treatment for glaucoma because of their neuroprotective properties and their ability to effectively reduce intraocular pressure (Tomida, Pertwee, Azuara-Blanco, 2004).

THC was found to significantly decrease the time it takes to fall asleep in physically healthy insomniacs (Cousens & SiMascio, 1973).

A large study on the treatment of spasticity amongst 572 patients with MS showed that 47,6% responded to the treatment during the first 4 weeks single-blind period of therapy. During the second phase of the study, a 12-week double-blind, placebo-controlled trial, the cannabis showed significantly reduced spasticity and frequency of spasms and improved sleep quality (Novotna et al., 2011).

Endocannabinoid-Dependent Synaptic Plasticity in the Dorsal Raphe Nucleus. The Journal of Neuroscience, 34 (44), 14560-14570.